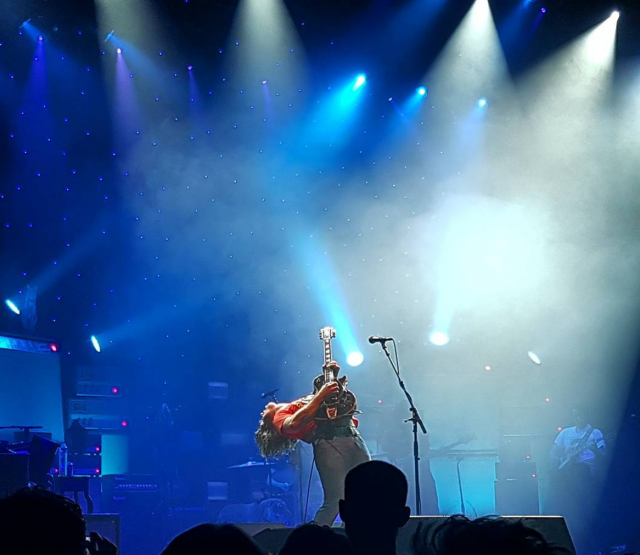 The queues to enter this glorified tennis court named after a contentious Australian sporting ‘hero’ stretched for miles. Security checks were rife, further delaying the entry for many and even forcing Ryan Adams to delay his set by some 15-20 minutes, but when he and band take shape through veils of dry ice and denim, post Sydney’s Middle Kids’ tidy set, they’re all business. Dwarfed by amps and speaker boxes, a bunch of ancient TVs are twitching films and static at us while faux cats and tigers rest on amps and guard effects pedals. It’s a trademark Adams stage setting of late. Powering through ‘Do You Still Love Me? from Adams’ recent cut, Prisoner, the outfit is weirdly standing light years from the lip of the stage. Maybe it has something to do with Adams’ Meniere’s disease, maybe not. ’Magnolia Mountain’ is up early and takes on a metal-meets-Santana twist with Adams and guitarist Todd Wisenbaker working over their ‘60s-era Stratocasters like a teenage garage band does in their dad’s back shed while smoking his stashed cigarettes and drinking cheap wine. ‘To Be Young (Is to Be Sad, Is to Be High)’ is sublime as always, ‘Gimme Something Good’ crunchy, then there’s a solemn version of ‘Two’ with ‘Outbound Train’ channeling every inch of the Springsteen that defines the track, complete with Grateful Dead-esque guitar wig-outs at the tail of the song. ‘My Winding Wheel’ and ‘Let It Ride’ have never dated and are still the classics we first wrapped our ears around eons ago on Adams’ debut Heartbreaker (2000) and Cold Roses (2005). ‘New York, New York’, Oasis’ ‘Wonderwall’ and ‘When The Stars Go Blue’ soon offer up an intensely emotional trifecta of tracks. Adams spends a few minutes goofing off with band introductions: keyboardist Ben Alleman has been “dropped in from the chopper,” while drummer Aaron Ficca, bassist Charlie Stavish and Wisenbaker ruminate on Back To The Future t-shirts and nerd-talk about guitars. Grateful Dead-influenced jams seem to feature at the tip of most of the songs along with krautrock interludes, climaxing on the band’s version of ‘Cold Roses’. Adams holds his attack on religious zealot Margaret Court until the end, proclaiming, “We can’t let the bigots have their say, it’s time to power through and have our say!” before closing the show on another masterwork, and there are so many of those, ‘Come Pick Me Up’. Advantage, Mr. Adams.