It’s doubtful that many of the attendees at the Moon River Festival would know the classic song of the same name. It’s around the same vintage as the salute to the legendary train. But that famous song title might in future also become synonymous as the name of one of the best ‘boutique’ festivals in the south.

The intriguing line-up and enticing location drew us here and sometimes you can just get lucky. After seeing Ben Harper & Charlie Musselwhite at The Ryman on Saturday evening we left early on Sunday for Chattanooga, headed to the second day of the fourth Moon River Festival, an event that sold all of its tickets in March, just a few days after going on sale!

The first day of the festival had been interrupted by heavy rain, which is what we also encountered as we headed down the highway. Actually we got torrential rain and worried that the event might be affected. It certainly didn’t bode well and light rain still fell as we neared the festival grounds.

Amazingly, however, the rain stopped completely as we arrived and, apart from about a half an hour of light drizzle, the rest of the afternoon and early evening was overcast but rain free. If I was religious I’d wonder if it was because Mavis Staples was appearing. (In the brief flashes of sunshine we were grateful for the conditions because, coming from winter in Melbourne, we got a sense of how the humidity here can be oppressive).

Founded by Americana musician Drew Holcomb, this festival spent its first three years in Memphis before relocating to Coolidge Park, under the Walnut Street Bridge on the Tennessee River. It now has 22 acts across two stages with the usual complement of beverage and food stalls. While there might have been 10,00 people in attendance there was plenty of room and a very relaxed atmosphere.

We were there to see Mavis Staples, The War & Treaty, Margo Price and Mandolin Orange but the festival also featured The Avett Brothers (as Sunday headliners), the Head and The Heart, I’m with Her and more. This is the sort of line-up that attracts a broad age group, so it was not uncommon to see lots of families with young children mingling in the crowd.

Moon River’s gorgeous setting is reminiscent of the late-lamented San Francisco Blues Festival located overlooking the famous bay. Here you look out across the river and up at the impressive footbridge that would later lead us on a short walk back into the downtown area. (Even on our brief visit it was apparent that this is a rejuvenated city with its fair share of hipsters). With just two stages, the Iris and Poplar, the choices are about as simple as it can get. I like this sort of decision-making.

Mavis Staples has had an extraordinary career and, at the age of 79 (!) seems to have as much energy as ever. Her latest Jeff Tweedy-produced album, If All I Was Was Black is yet another step in a remarkable career and her next album is due to be produced by Ben Harper. 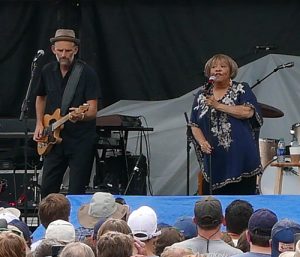 The voice might understandably be a little huskier these days (but not as much as her old flame Bob Dylan) yet Staples imparts such enthusiasm that the audience is won over immediately. While most of the songs reflect the messages that Staples has been delivering for more than 60 years, and her recollections of the march with Martin Luther King Jr decorate ‘Freedom Highway,’ she lets the music do most of the talking. For someone like Staples who was at the forefront of the Civil Rights movement, comment must be irresistible but she restricts herself to a single reference to ‘the old fool in the White House.’ Everyone applauded loudly. Some things are self-evident. For a veteran performer, it is a stunning display of artistry. 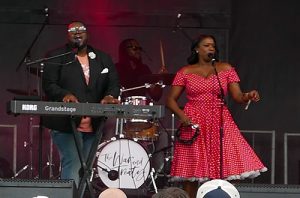 For some reason The War & Treaty not only had their set time bumped up but also shortened. It hardly made a difference. The duo of Michael and Tanya Trotter arrive like a storm of emotion and even a brief set had the audience yelling, waving arms and applauding wildly. More secular than Mavis, they nevertheless harness the same sort of feeling for the good of humanity. The passion between the two singers is palpable and that translates to the audience response. The duo’s new Buddy Miller-produced album Healing Tide should set them on an upward path and they are set to visit Australia early next year. On the strength of this abbreviated show alone you would not want to miss them. 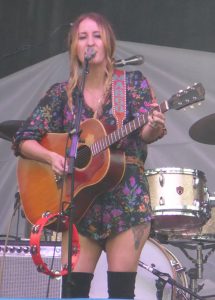 Margo Price was the first ‘country’ signing to Jack White’s Third Man Record label and she brings an air of rock ‘n’ roll energy to songs that could have easily been recorded by a brace of great women singers from around this region. While there is a massive mainstream country music industry out there, mainly pedalling fantasy, Price’s world is closer to the lives of her audience and is replete with the same sort of drinkin’, fightin’,cheatin’ and strugglin’ as the classic country songs. Price’s band rock hard but have enough subtlety to make you realise that in years to come some of these songs will also be classics. Price will be in Australia next month and should be somewhat of a sensation!

As we left the festival later in the evening we could look down from the footbridge and enjoy more music waft over us as we headed back on the short walk to town.

While our visit to Moon River was brief, it was long enough to ensure we will return. It seems like the absolutely perfect appetiser to the Americana Music Festival and Conference which is on the following week.

(Note: If you are planning on coming next year be warned: tickets go on sale sometime in March and will sell out quickly!)