The Swamp Fox, Tony Joe White, is to put it simply a bona legend of the music game and at the age of 73 he just keeps getting better. So it with great pleasure Love Police are pleased to announce his return to New Zealand and Australia in April 2017.

Tickets for all Australian shows are on sale now. Tickets for New Zealand go on sale Thursday November 24 at Midday NZ Time.

Tony Joe White was literally born for the blues, the part-Cherokee musician being brought up as part of a big brood on a cotton farm in Louisiana, raised on a diet of Lightnin’ Hopkins and local bluesmen, an upbringing reflected to this day in his evocative, haunting music and adding a veneer of authenticity to everything that he touches.

Gems like “Polk Salad Annie” and “Rainy Night in Georgia” were just the beginning. His recording career has now spanned parts of six different decades and spawned well over 20 albums with his songs recorded by Elvis Presley, Tina Turner, Ray Charles, Roy Orbison, Dusty Springfield, Tom Jones and Etta James. He has worked in the studio or on stage with list of artists that would make your head spin – Jerry Lee Lewis, Carl Perkins, The MGs, Eric Clapton, JJ Cale, Waylon Jennings, Lucinda Williams and Emmylou Harris and recently appeared with the Foo Fighters on Letterman as they performed Polk Salad Annie which prompted host David Letterman to say “If I was this guy, you could all kiss my ass.” Fair call.

TJW is not one to sit still, and he’s still as relevant as he ever was with the release of his latest album, Rain Crow. American Songwriter magazine gave it 4 from 5 star review and said “Rain Crow is yet another stunning example that Tony Joe White’s uncompromising, often ominous vision, shows no signs of diminishing.”

Opening for Tony Joe White in Victoria and NSW will be Leah Flanaganwho melds an ageless voice with complex and alluring lyrics in a combination that has audiences entranced. It’s a sound reminiscent of singer/songwriters of the 70s that has captured hearts with laments and celebrations of love, sincerity and soul. A songwriter with Venetian, Aboriginal and Irish heritage, Leah draws deep from a fascinating historical, geographical and cultural mix.

In Western Australia will be multi-instrumentalist Lightning Jack, who’s Blues Roots Grunge style of music, is a percussive sound that is very much his own.

So whether you’ve been with White for the duration or are a newcomer to his incredible music it matters not – come along and join the festivities when the legend that is Tony Joe White hits down under in 2017. 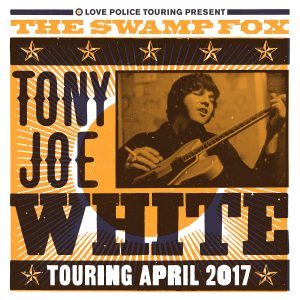