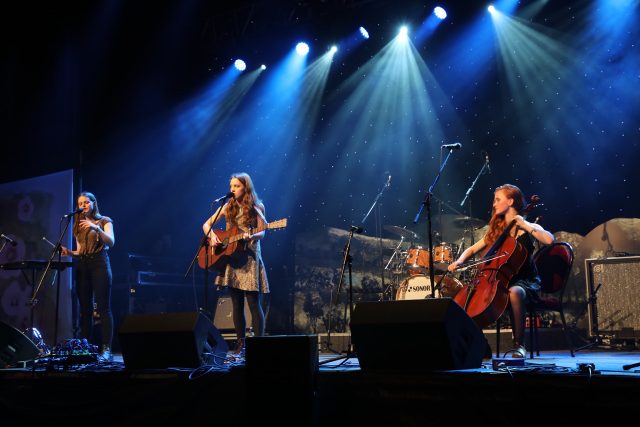 Over 200 national and international acts came from all corners of Australia and the globe for this year’s National Folk Festival at Exhibition Park, Canberra over Easte
r. With an aggregate attendance of 46,000-48,000, audiences experienced a stellar music program with sensational Autumnal weather across the five days of the Festival.

Stand-out artists of the Festival included National Folk Fellow Jessie Lloyd for her Mission Songs Project who, with a line-up of top Indigenous artists, presented a rare collection of early Australian Indigenous contemporary songs that were performed on missions and settlements. All Jessie’s shows were packed out. French Canadian electro-trad group Melisande had people dancing late into the night with their unique Quebec flavoured grooves, and BBC award-winners The Rheingans Sisters enchanted one and all with their warm harmonies and reverie on stage. Locally there were many acts not to be missed including the Spooky Men’s Chorale who generated a following of old and new converts wherever they went, and 19-Twenty who with their dirty grungy blues, got everyone into the party mood wherever they played.

The National Folk Festival continues to recognize achievement and excellence and to nurture emerging new talent through its Awards Program. In 2017 it was the young women of the Festival that shone.   Captivating indie singer-songwriter Loren Kate, who grew up on the Central Coast of NSW took out the Lis Johnst
on Award for Vocal Excellence.  The Gill Rees Award for a promising young musician (or musicians) was awarded to the girls from Charm of Finches, only 14 & 17 from Melbourne who delighted one and all with their outstanding musicianship and smooth harmonies. The Folk Alliance of Australia Youth Folk  Award went to Brisbane based singer, songwriter and cellist Monique Clare, and the Peter J Daly Memorial Award was won by Victorian all-girl group  The Drowsy Maggies.

Over the weekend the Festival streets glowed with pop-up street theatre, roving choirs, disco bikes, stilt-walkers, market stalls and eat streets. There were buskers on ev

ery corner and opportunities a plenty for young or emerging artists to strut their stuff on the many blackboard venues at the Festival. The new Talks, Forums and Conversations Program was a sparkling success with many festival-goers heading into the stimulating sessions focused on books, ideas and insight while the new, edgy festival-within-a-festival, FringeWorld, attracted many patrons into its precinct.

The 51st National Folk Festival would not have been possible without the incredible assistance of over 1100 dedicated and hard working volunteers, in the lead up to, during and post Festival. The Festival would also like to thank it’s many sponsors for their support of the 51st Event, in particular Events ACT who made the new FringeWorld space possible.

The 2018 52nd   National Folk Festival will be held from 29 March – 2 April. Artist Expressions of Interest for 2018 open from 1 June – 14 July 2017. Keep up with the latest Festival News and experience the magic of this year’s 51st Festival through our many photo galleries across Facebook, Instagram and Twitter. @natfolkfest #ournff #5daysinaperfectworld