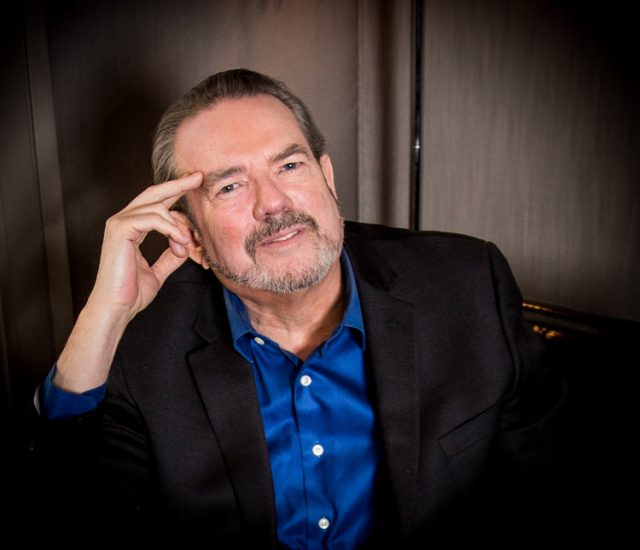 There is a wonderful Kafka quote at the beginning of Jimmy Webb’s new memoir, The Cake And The Rain, which pretty well sums up Webb’s attitude to his career and life in general. “Don’t bend, don’t water it down, don’t try to make it logical, don’t edit your own soul according to the fashion. Rather, follow your own most intense obsessions mercilessly.”

I asked Webb what these words meant to him. “They are very inspiring words! A great rallying call – a locker room speech.” Webb, who is one of the greatest American songwriters of the last 100 years, is returning to Australia this month for a series of concerts.

Webb, the son of a Baptist preacher, started his musical career as the church pianist at his father’s church. “By the age of 12 I found myself playing all types of church music – hymns, liturgical, I played for weddings, funerals – I played it all,” Webb relates. “But I didn’t really catch fire until I met this wonderful piano teacher called Susan Garwood and she taught me what Leonard Bernstein called ‘transformational arranging’. My father was delighted by what it did to my playing in the church, but all I was doing was trying to play piano well enough to get out of the church!”

“When I was 14 years old, I heard one of Glen Campbell’s records on the radio while I was driving around on the tractor – ‘Turn Around Look At Me’. I drove 22 miles to the nearest record store, got the record and I played it until it was slick and shiny!” Webb continues. “I got down on my knees and prayed ‘God please let me write songs for Glen Campbell.’ By the time I was 20 years old I had a hit on the radio by Glen Campbell!”

Webb saw himself as a ‘pure songwriter’ in a period when there were songwriters and there were singers. Of course, all of this changed with Dylan and the Beatles, but Webb was able to become a hugely successful songwriter in the late 60s and early 70s. Webb says that he always loved all kinds of music and proved it by writing songs that were above any one genre. His songs were recorded by pop artists – Glen Campbell, Richard Harris, the 5th Dimension, middle of the road artists – Frank Sinatra, Tony Bennett, Liza Minelli, Barbra Streisand, jazz artists – Maynard Ferguson, Stan Kenton, folk artists – Judy Collins, Joan Baez, country artists – Waylon Jennings, Kris Kristofferson, Johnny Cash, singer-songwriters – Linda Ronstadt, Shaun Colvin, Nanci Griffiths and many, many others.

The musical world changed again with the success of Carole King’s Tapestry. The singer-songwriter movement became the dominant genre and Webb had to adapt to being a performer as well as a songwriter to stay relevant. “I decided to pursue a singing career because that’s the only way I could be an artist – to stay current and relevant. I wanted to be in that group of people who were playing festivals and were considered hip.” (As a trivia note, Webb actually played at the Monterey Pop Festival as the piano player in Johnny Rivers band!) “When I started out I wasn’t particularly good – I had to really work at singing – the consistency wasn’t there. But over time, I became better and better and better at it until I could put on a consistent performance night after night.”

In Australia what we will experience is the consummate performer. “It’s me and a piano, it’s like being invited into my living room. There is a lot of interaction between me and the audience, lots of hit songs, I tell a lot of stories. I try to bring certain moments to life on stage. I guarantee laughter and learning and perhaps tears, and of course there’s all that music!”