The majority of today for me, and many others, was spent just floating around the various stages sampling any and every musical offering like a smorgasbord of tasty treats. 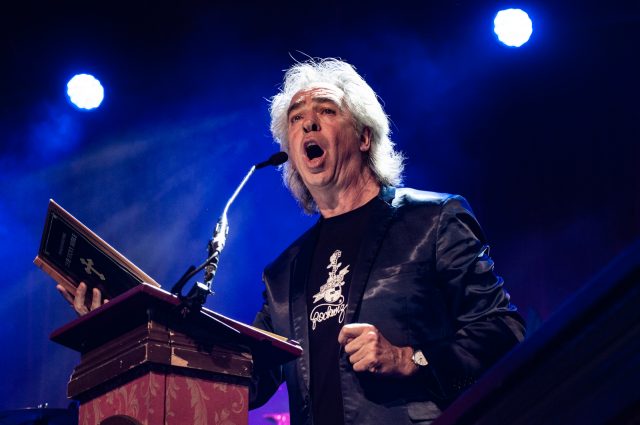 Starting off was a good-sized helping of RocKwiz, the live version of a favourite TV quiz show. Hosts Julia and Brian expertly wrangled a revolving-door of musical and quiz-cal guests. Sarah McLeod, vocalist of The Superjesus, blew the (canvas) lid off with a full-on version of Led Zeppelin’s classic Rock And Roll. The ever-versatile band (or ‘Orkestra’) carried off a dizzying variety of styles with aplomb.

From there all bets were off, and keeping to a schedule proved impossible. Allen Stone impressed, as did a return visit to Ruthie Foster who was a favourite from a few days previous. Melbourne Ska Orchestra probably won the most-people-on-stage gong (and most knit shirts per square metre), Nathaniel Rateliff, Gary Clark Jr, then the coin-toss decision to defer George Clinton viewing for the following night, favouring veteran ‘Australian blues’ outfit The Backsliders on this occasion.

Led by founder-member guitarist Dom Turner, The Backsliders lineup has been through quite a few incarnations in its 30-year life, including a period with the late and much missed Chris Wilson in tenure. This lineup however has enviable and substantial star-power in drummer Rob Hirst and harmonica player Ian Collard, both absolute musical royalty in their respective fields.

Amiable cool-cat Turner alternates through a dazzling array of vintage guitars, each one a work of art as well as a functional tool of trade. Harmonica maestro Collard’s pedigree lies with The Checkerboard Lounge, Three Kings, and Collard Greens And Gravy, all mainstays of the Melbourne music scene over the years. His addition to the Backsliders lineup is an inspired one. Hirst sports a massive grin on his dial all the way through the set, his enjoyment obvious, pulling flash percussive flourishes out of the air and even a few patented ‘rockstar’ moves – he pantomimes adjusting a cymbal stand to precision only to demolish its position with a king-hit moments later. But regardless of all this, the music stays true to its central position of investigating and expanding on the musical roots of rock and roll. A tip-a-wink backflip, as it were, reimagines the Rolling Stones’ Gimme Shelter as an R&B rave-up. The chug-chug rhythm of Run Through The Jungle likewise pleases. Classy fun.