Over the course of a storied career that’s currently in its third decade, Australian guitarist Dom Turner has made a hell of a lot of music. Perhaps most noted for his role as frontman for seminal Oz blues trio Backsliders, Turner has also stepped off the well-worn path, collaborating with the likes of US harmonica whiz Phil Wiggins, Vietnamese Cai Luong (folk) player Kim Sinh and a slew of others, the latest of which is virtuosic American lap-steel player Nikki D. Brown.

The pair, along with Brown’s band – sisters Gloria and Belinda and drumming cousin Tomika Webb – have put together an EP, Sliding Steel, which showcases an incredible musical understanding between Turner and Brown, as they quickly (over five tracks), bring to life the gospel, funk and blues that Brown in particular has grown up with. ‘Going For Blood’ is heavy on the fuzz, while ‘Hear Me Out’ is the most down-and-dirty groove you’ll find this year. A new and gravelly reading of ‘Amazing Grace’ adds a nice touch, the overall result a cracker to be sure. 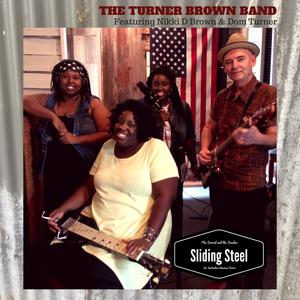