Cognac used to host the premiere blues festival in France, if not Europe. Sadly, now however, it seems to have largely lost its way with blues players mostly sidelined to smaller side-stages, while mega-stars rule the roost with their every whim catered for by the organizers.

Irish band, the Cranberries, also appeared with their brand of Celtic-folk-rock and little blues background or involvement, leaving those few genuine blues-fans still in attendance desperately seeking solace elsewhere, including at times the bars surrounding the city-centre, festival site.

On the blues-front Australia’s CW Stoneking did ratchet the music up with genuine understanding of tradition and a dash of positive modernity and originality; and another Ozzie, Steve Tallis, also produced a captivating, solid blues-set despite his bass player, the UK’s Skip McDonald, having taken ill a few days ahead of the gig and having to scratch the event. Tallis was a bit of a revelation and is clearly a guy to watch. From the USA, Gaye Abdegbalola and the Wild Rutz cemented their recent Memphis success with an inspiring blues-gospel set that shimmered positively with radicalism and perceptive thought about the current difficulties of modern US race-strife and life.

On the opening night soul-bluesman Roy Roberts, from Greensboro, NC, and his band, produced a fiery set that shone and showed the others just what can be done with the music. For me, a festival highlight, Roberts is a veteran performer who has played with Otis Redding, BB King, Stevie Wonder and Solomon Burke over the years and clearly knows how to shake it up and shimmy. 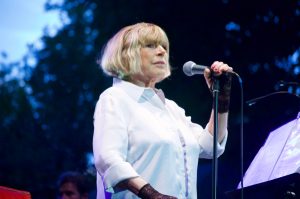