Frontier Touring are honoured to announce the return of Eagles co-founder, vocalist and drummer Don Henley to Australia and New Zealand in March 2017 for a run of indoor and a day on the green outdoor shows.

Last in Australia and New Zealand in early 2015 with the Eagles, Don Henley’s 2017 tour will see him perform songs spanning his entire career from the Eagles and his vast solo catalogue, including songs from his latest album Cass County (out now through Capitol Records) which was named after the East Texas county in which he was raised.

Joining Don Henley on all of his Australian and New Zealand dates will be American singer-songwriter Jewel. The multi GRAMMY Award winner launched to stardom in 1995 with the release of her debut album Pieces Of You, which went on to become one of the best-selling debut albums of all time. 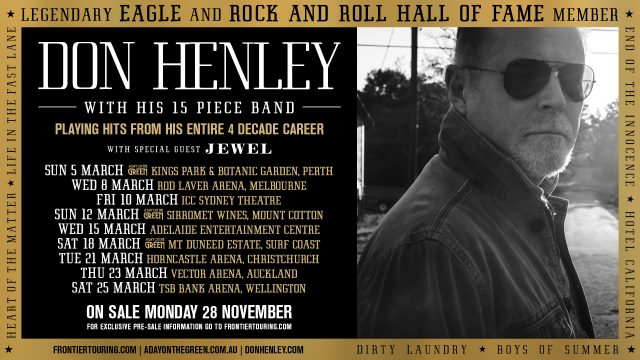 A DAY ON THE GREEN CONCERTS
Visit adayonthegreen.com.au for more information (not Frontier Touring shows)