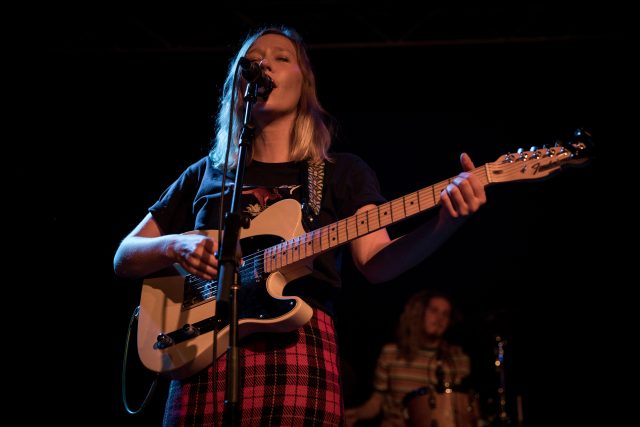 There is something about homegrown talent that makes a show that much sweeter, especially when that motherland act is the sweet alluring
personality of

Julia Jacklin. From her signature checkered skirt to her soft toned delivery, Julia Jacklin has cemented herself as one of the finest emerging Australian talents. With a sold out Metro Theatre crowd, this was sure to be a memorable experience.

Not many people can pull off coming out to the Bee Gee’s classic, “Staying Alive”, but somehow it fits the persona of Jacklin as she pulled it off with pizzazz. It sure didn’t look like the audience complained either, as you could’ve mistaken it for a Studio 54 gig back in the day.  Generally at a show you can always hear muted chatter amongst the audience although there is an act on stage, however, this was not the case at The Metro. I don’t know what it is about Julia, but she commands a certain tranquil mood out of her audience without saying a word, it’s refreshing. Coming off the release of her stellar 2016 album, Don’t Let The Kids Win, we would be fortunate enough to hear the majority of the album.

There is a subtle twang of the Telecaster she plays that aids the overall musical aesthetic of track after track, it’s subtle, but without it the entire aura of the performance may not feel as intimate. The entire night felt more like a living room session with your friends rather than a sold out crowd
packed in every square meter.

It’s wonderful to hear a live show that sounds exactly like an album. Julia and her band of talented musicians put on an NPR caliber performance yet again, but this time it was local, what a time to be alive. The genuine feeling of hearty goodness radiated until the very end of the gig, and there is something to be said of an artist that can be this authentic. In a music world plagued with negativity and excessive ego, it’s dandy to see acts like Julia Jacklin rise to success.
There is still plenty of time to catch her in Australia so you should probably make arrangements to do so, you won’t leave disappointed.  Also, be sure grab a copy of Don’t Let The Kids Win to add to your ever-expanding vinyl collection that you spin from time to time.  Remember to support your local music scene, it’s important!