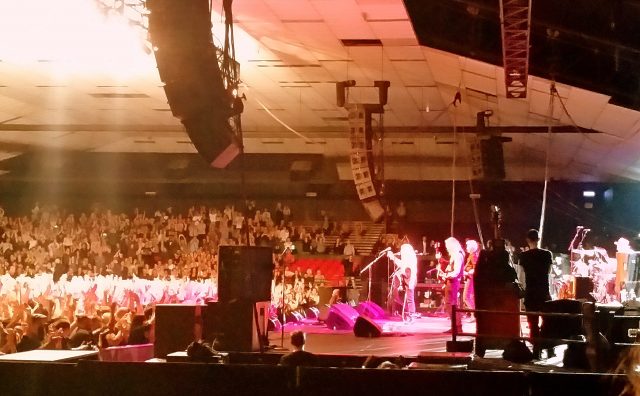 I’m tempted to say simply, “No Words”. But I want to share a scintilla of the life-affirming energy and wonder that Patti Smith transfused us with on Thursday night. The buzz continued to hum in the West Melbourne air as punters hovered after exiting. From footpath to the black carpet of bitumen, it was as if none wanted to leave the place of worship. For a Rock & Roll deity had just wrapped us in her warm and sturdy arms for almost two hours.

Patti and her band had played ‘Horses’ concerts (including Bluesfest) to mark the 40th anniversary of the album’s release. The Festival Hall show was added late, billed as the ‘Queen of Punk’s’ last ever Australian gig. The wide-ranging back catalogue set list exceeded all expectations. Smith’s commanding vocals appear to have improved with the passage of time. From opener ‘Dancing Barefoot’, we knew it was gunna be a momentous occasion. ‘Pumping (My Heart)’ was a last minute inclusion as a nod to the boxers who once battled it out in ‘the house off stoush’. Apologising for a (slightly) rusty delivery, Smith said she loved the space. The vibe in the grunge-worn cavern made it feel like “some great shitty little club”. I’d suspected the old barn would be the ideal venue for this show. Those standing before the stage rocked from start to finish. Seated on bouncy orange plastic, the rest greedily stomped feet, making the wooden floorboards thunder – just like old times.

Bob Dylan’s ‘A Hard Rain’s A-Gonna Fall’ was prefaced with Smith’s memories of her 15-year old self. She donned reading glasses and sung from a lyrics sheet, urging us to sing along to the chorus but we were already there. Approaching the final line of verse (‘I’ll know my song well before I start singin’), she scrunched and tossed the paper into the darkness. An ironic nod to ‘that’ Nobel Prize moment. ‘Radio Ethiopia’ again punched the night via ‘Ain’t It Strange’ and ‘Pissin’ In A River’. Smith’s moves ranged from outstretched arms, primed and pumping, to primal invocation right in the face of Lenny Kaye’s guitar. She told us of a Jim Morrison-inspired dream sequence behind the writing of ‘Break It Up’, laughing at her trippy imaginings. Local legend Kerryn Tolhurst (The Dingoes) joined the band for ‘Beneath The Southern Cross’, incorporating a taste of The Beatles’ ‘Within You Without You’ which Smith covered on 2007’s ‘Twelve’.

Courtney Barnett and band garnered more appreciation than can usually be expected by a support act. The Fender shredder clearly relished the chance and gave it her all. She appeared well at home by the time the fabulous ramble of ‘Avant Gardener’ rolled out. Barnett joined Smith on stage for another fist-pumping sing-along highlight, ‘People Have The Power’. When ‘Land’ swaggered over into ‘Gloria’, we proved we could all spell in tune, from pulsating staccato to a slurred compression of vowels. We yowled to keep up with this septuagenarian – this fearless, lion-hearted, lion-maned woman who showed girlish delight between the calls-to-arms. The encore brought ‘Because The Night’, her commercial hit from ‘Easter’ before ‘Rock And Roll Nigger’ reset the room to flat-out punk glory. “I thought we were done…” she said before continuing to defy the clock. The recurring message of a united humanity, laid down early with ‘Ghost Dance’, was brought full circle as Smith clutched the Australian Aboriginal flag during her a’capella gift of ‘Wing’. The band stood beside her as silent sentinels then photographed the crowd. This was the time for eyes to swell – with gratitude, reminiscence and recognition of a defining moment. Did she swear and spit? Yes she did. Did she pause to tie her bootlace, then check her fly at the suggestion of a fan? Yep. Had she individually wrenched every goddamn string from her electric guitar before the final bow? And did she recognise the sanctity of the evening? Absolutely. A voice, a history, a heart like no other. She told us to love one another. There are as many lost souls as ever to speak for. As much injustice to rail against. If only she had a gig coming up at the White House.