Soul crooner Simon Burke and his band The Meltdown are back with the release of Colours In The Sky, the first single from their self-titled debut album, coming in 2017.

From a band known for bumping, horn heavy dancefloor cuts, Colours In The Sky marks a change in direction – a majestic piece of downtempo country soul evoking big skies and long roads. The ballad feel finds Simon Burke’s honeyed voice at it’s most sensitive. Shades of Otis and Sam Cooke on a twangy southern tip.

Still firmly favouring the one room, one take style of analog soul recording, The Meltdown have convincingly dialled the volume and the tempo down to a smouldering new level without sacrificing any intensity. There’s so much space between the shimmer of the guitar and the warmth of the wurlitzer that the verses feel like open horizons, and the choruses pile up like clouds in layers of celestial female vocals and soaring Hammond organ.

Colours In The Sky could be slow dance music, or road trip music or any kind of soundtrack music, but what it is first and foremost is songwriting at it’s best. Songwriting supported by understated but expert musicianship and production and delivered with that voice. That voice! ‘Colours in the Sky’ is available on all digital stores and streaming services on HopeStreet Recordings from November 11th, 2016. 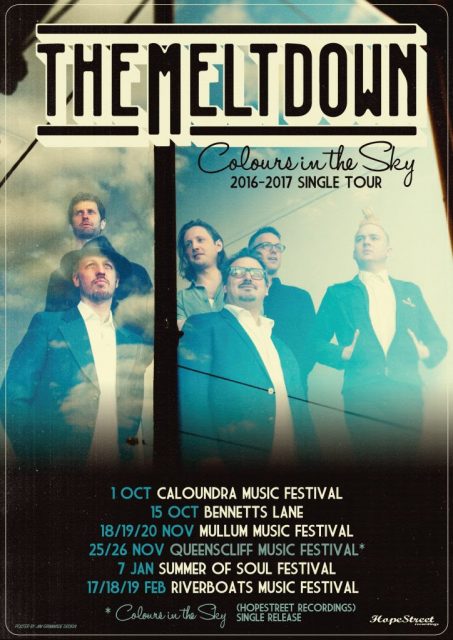