The 31st Woodford Folk Festival closed in spectacular fashion last night, however record crowds are causing organisers to ponder the festival’s future. Audience growth in excess of 5%, and an aggregate number of 132,000 patrons over six days, have put pressure on Woodfordia’s hard infrastructure.

According to Festival Director, Bill Hauritz, “It has been a most beautiful festival in almost every way but our future is unclear.”

“Raw water storage, and dusty and broken roads took the edge off what was a truly wonderful event,” said Hauritz.

“Dust was a big problem we have to fix, and the roads – they’re just not up to required standards. That’s just the beginning of our infrastructure issues,” he said.

“But it’s been an amazing event this year,” said Hauritz, “This festival is becoming a hub for creativity attracting some great minds. It’s been an inspiration for many of us.”

“This festival attracts over 2000 diverse artists and performers, as well as prominent speakers and creative projects.” 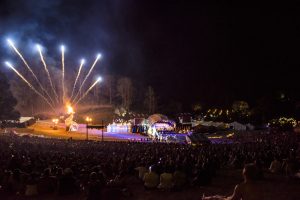 Comprehensive independent surveys consistently show that a third of the festival visitors attend from interstate and over 3% of attendees are from overseas.

“The Folk Festival last year injected $30 million plus into the Queensland economy with $16 million remaining in the local region around Woodford, Caboolture and surrounding areas – from this year’s event I expect those figures will grow” Ms. Jones said.

“I congratulate Woodfordia Inc., their committee and two thousand willing volunteers who have made the 2016/17 festival a fantastic event with record attendance, beautiful sunshine and many happy faces.” 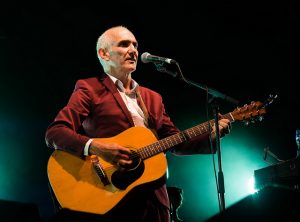 Paul Kelly performing on the first night of the festival.

Culminating in the burning of the Beacon effigy, the Fire Event featured a community choir and orchestra of 300 people. 700 people performed in the grand spectacle performance to an audience of 15,000 in Woodfordia’s Amphitheatre.

“It is a product of the diversity of talents we have working here at the festival – from the lantern makers and choir to the orchestra, puppeteers and pyrotechnical mastery of our production team.”

Head of Programming Chloe Goodyear also attributes the festival’s success to the creativity and collaboration of performers.

“We introduced another round of new artists this year, and about 60% of those had never been to Woodford before. It’s been lovely and exciting seeing those people transform from artists who have heard about the festival to people who have played it, and enjoyed it.”

“We’ve also had a record number of cross-collaborations – I feel like every second stage I looked at had a special feature line up. All of these things helped contribute to the great spirit of camaraderie this year – we’re so happy and so appreciative.”

New additions to this year’s festival included the introduction of RFID wristbands, as well as reusable cups, to reduce the 270,000 disposable cups that were transported off-site after last year’s festival.  Both initiatives are part of ongoing commitments by organisers to improve the sustainability and efficiency of the event.

Moreton Bay Regional Council Mayor Allan Sutherland said he had witnessed first-hand the incredible development of Woodfordia and with it the growth of one of Australia’s national award winning major events.

“Woodford Folk Festival has continued to grow and grow over its 31 year life and this year the festival recorded a five percent growth in attendance from last year,” Mayor Sutherland said.

“With such a successful year of festival attendance and camping numbers – it has never been more important for all levels of Government to provide funding support and certainty to Woodfordia Inc. to turn Woodfordia into a destination worthy of ongoing national and international acclaim.”

“Funding will be vital to ensure this site receives much needed infrastructure upgrades including permanent staging, toilets and amenities, dust control, roads, and camping space for this iconic Australian festival and Woodfordia itself to grow and flourish.”

Photo highlights from the festival can be found here: https://www.flickr.com/photos/woodfordfolkfestival/